Thousands of developers flocked to Devoxx again this year and everyone I talked to really enjoyed the wide range of talk and the comfy chairs in the venue.

Its hard to do justice to the experience in a blog post, so here are highlights of my favourite Devoxx speakers

Dick Wall and the Java Posse

Have these guys reached legendary status yet? For a number of reasons I think they should - just for being out there and getting people motivated they deserve a medal (or just lots of free beer from Atlassian).

Dick Wall followed up with what seemed to be top attended session of the conference. He talked about slaying legends (ironic considering my last statement) and encouraging people to think for themselves - I know, radical stuff!

The diabolical developer also made an appearance with Trisha Gee and the Java Duchess crew speaking on how not to treat women in IT.

Its always a great learning experience when developers pair, so pairing to give a session always gives you that extra dimention. Watching these two present was fascinating and fun!

The guys gave honest and open comparison of JavaFX which most people thought was dead but seems alive and well and HTML - humour was about and no ego was on display.

Alex did a great job druming up even more interest in Clojure and gave some facinting insights into the language. His first talk was aimed at getting people started with Clojure and I was great to see different ways of getting Clojure concepts across. I am doing a quick refactor of my Clojure talk for the LJC conference this weekend.

Unfortunatley we didnt get chance to pair up and do some Clojure coding together, too many great conversations got in the way.

Justin gave a great talk on DVCS and understanding how to get the most out of Git in your own teams. Git is relatively new to most teams and using services like Bitbucket and Github can give developers a lot of power to manage their code effectively. 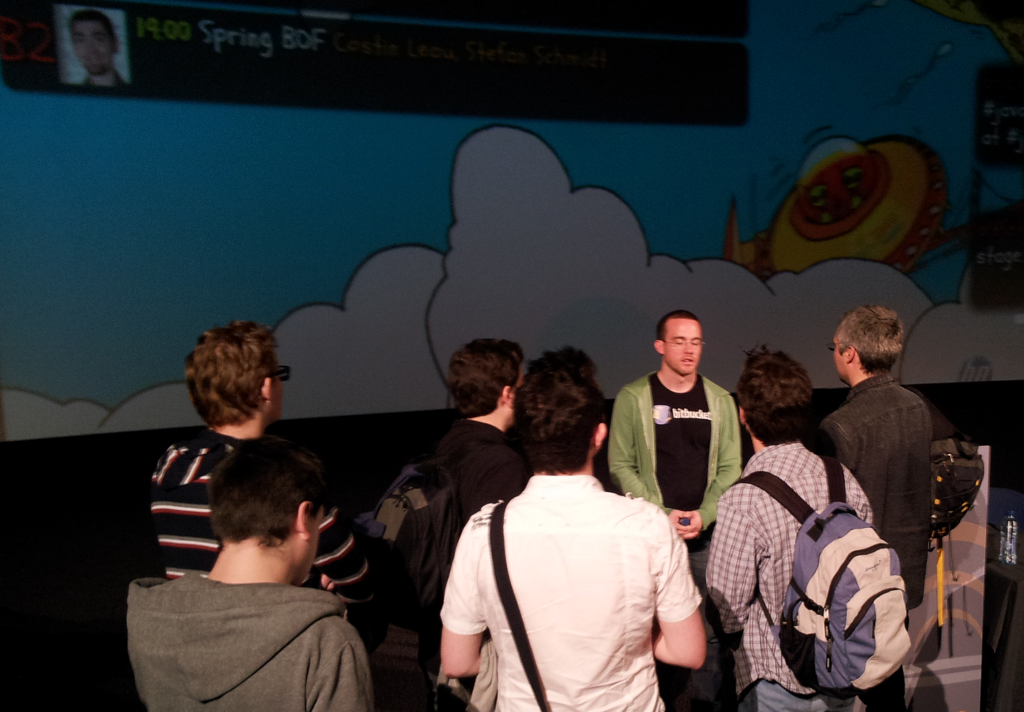 Lots of advice was given out on how to manage your repos and how to use pull requests to manage feature branching and other aspects of continuous deliver & deployment. Its worth checking out the video on Parleys if you want to know more.

Its great to see speakers getting feedback and there was a huge queue of people lined up to speak to Justin afterwards.

Adaptavist guys fired up some Microsoft Kinect love on all the big tv’s outside the talk theatres. Dan Hardiker went above and beyond the call of duty and dressed up as a very large Java Duke for the afterparty. He seems is a good dancer when dressed up!

Thanks to Stephan and everyone else (too numerous to mention) that help put Devoxx together. I am really looking forward to the next one, whether that be in France or Brazil?

houdini68 Thanks to Stephan and to all the people who turned #devoxx into a success !!! One week in paradise ! See you next year !

odersky: Slides from my talk at #devoxx slidesha.re/rtcEJL

TomaszDziurko: I’ve just posted my relation from #Devoxx 2011 on my blog - bit.ly/sF79hm

planetsizebrain apparently a running joke at #devoxx 2011: Q: What’s the difference between Ant and Maven? A: The creator of Ant has apologized.”