Its been a cold week in London so its great to see so many venture out to the latest meetup of the London Salesforce Developer community.

Thanks to our hosts, Make Positive, there was plenty of pizza to warm everyone up and plenty of drinks to cool everyone down again. Make positive have a very roomy office to work in and its a great space to talk to other developers and admins involved in forcedotcom projects. 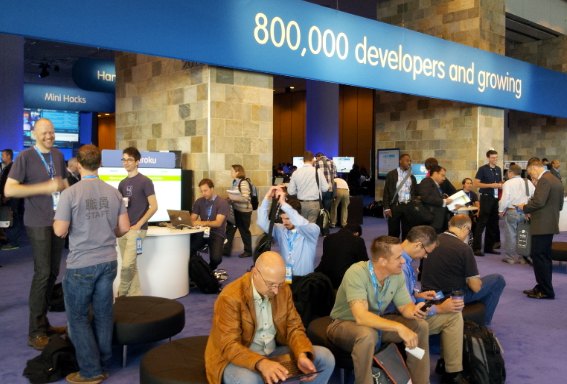 The promise of fast application development using the Salesforce platform is very appealing and the latest release has attracted over 800,000 developers.

Heroku (part of the Salesforce family) is also attracting a lot of attention. By allowing developers to deploy their applications with a simple git push command, it helps make continuous deployment becomes a reality.

These are just two of the reasons I took the opportunity to join the amazing team at salesforce.com. So you can imagine I was overjoyed when I started as Developer Advocate for EMEA. Here is what that role is all about.

Over 7,000 developers flocked to the DevZone at this years Dreamforce conference. I was one of them and along with Adam Seligman, Keir Bowden and Andy Mahood we told tales of our experiences to the London Salesforce Developer community.

Wes Nolte took charge of the mike and quizzed the panel on their experiences of the event. Here are the questions that stuck in my memory from the evening

What was the thing that got you most excited about Dreamforce ?

The thing that got to me was the sheer size of it all. With so many developers around it was great that we had a whole of Moscone West to spread it all out. There were banks of laptops provided for anyone to get involved in coding workshops and all through the day they were all filled up.

There were so many different things to do, from playing donkey kong to coding, listening to great talks, guided tutorials, code consultations and quizing lots of people from Salesforce and Heroku about their platforms. 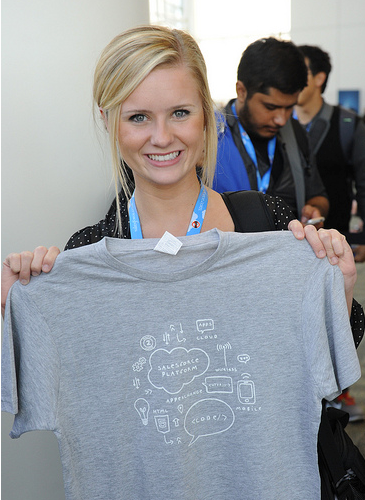 The biggest problem was what to actually do from so much choice. Of course there was an app for that too and a chatter stream so you could discuss sessions as well.

If you couldn’t make up your mind you could also queue up and print your own t-shirt!

It was a sign of how open the conference was to have an un-conference section, where anyone could propose a talk. There was even a theatre dedicated to community related talks. I met some great guys from Bristol who are starting up their own Salesforce community events.

What was your favourite session ?

The most entertaining session was by James Governor from RedMonk, comparing the rise of craft brewing with the rise of developers. Craft brewing is bringing back the entrepreneurial flavour into beer making and bringing quality product to the market. Developers are doing the same for startups and enterprises around the world. Calling developers the new kingmakers, James highlights how important developers are and the responsibility we have on our shoulders to support the businesses and projects we are involved in. See article….

I also really enjoyed the live coding challenges from MVP developers and developer evangelists. There was a great banter as well as great code being bashed out. 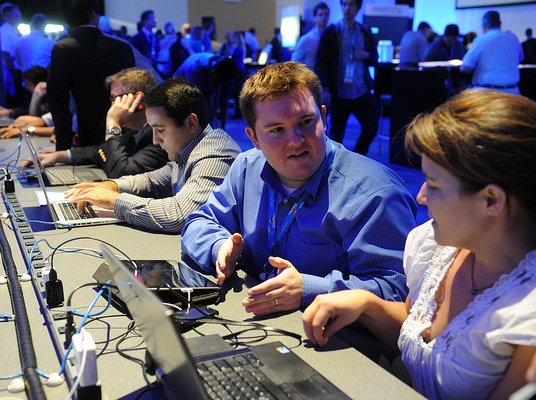 My favourite moment was when one of my colleagues was presenting. They had a great presentation line up, all using on-line resources and then the wireless failed. Before the venue tech guys had chance to fix it, someone from the audience donated their phone and the presentation was on again. I had a warm fuzzy feeling about that!

All through the conference there was a feeling of collaboration and community. Whether that be debugging each others code through the workshops or collaborating on the mini-hacks. There was a constant stream of activity every day.

Have a look at all the videos and code produced at the DevZone this year and see for yourself.

What new stuff are you already using or want to try straight away ?

In a nutshell, it has to mobile development. I remember spending a day in a workshop getting up to speed with development on Android devices and there was still lots to learn by the time I had finished. That seems like a lifetime compared what I saw at Dreamforce. Using the Salesforce Touch platform you can easily and quickly build HTML5 and hybrid applications in be finished in hours, not days.

It seemed the hardest thing for mobile development using the Touch platform was registering for your Apple ID.

Turing the tables on the audience

At the end we turned the tables and each panellist got to ask a question of the audience.

I wanted to shorten our name from “Salesforce platform developers user group London”, not the easiest thing to tell your friends about. From the feedback we got we have changed it to the punchier London Salesforce Developers, which encompasses the different platforms (heroku, force.com, data,com, etc) under one name.

Over 80 developers braved the cold October night to hear about out experiences and it was a great social event, made even better by the beer and pizza provided by Tquila.

Thanks also to our gratious hosts, 10Gen, for providing the venue. 10Gen are the company behind the popular MongoDB.