There are many things that make the MacBook pro a nice machine for software developers. The default version of Java Standard Edition development environment is not one of those things.

Although Java SE does come pre-installed on most OSX versions, it is the soon to be unsupported Java 6 version (unsupported that is without paying Oracle big support fees of course).

Whilst its fairly easy to install Java SE 7 on the Mac, its a little more interesting when it comes to setting it as the default Java runtime environment. If you also want to try installing OpenJDK 7, then there is a little more discovery to be done when locating the install files. This article covers the easiest way I found to install Java SE 7 and OpenJDK 7 together.

To openjdk or not openjdk, that is the question. On the Mac there doesn’t seem to be much in it when it comes to ease of installation. Both Oracle Java SE 7 and OpenJDK 7 come as dmg files for the Mac, although the OpenJDK files are not as easy to find.

There is a website for the OpenJDK project, although most of the content seems a little dated and unless you are running Linux it provides nothing of interest to help you install OpenJDK on the Mac. Download the latest versions of Java SE 7 and OpenJDK 7 and open the dmg files to install them. 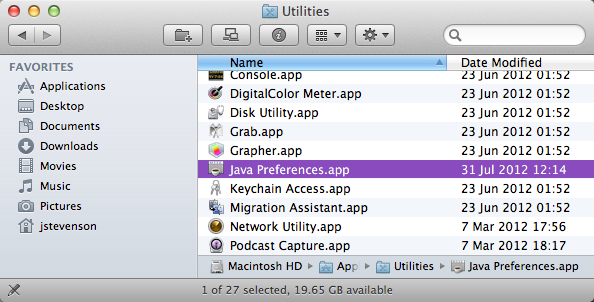 OSX allows you to install multiple versions of the Java development environment, a very useful ability especially for testing new versions easily. In the Applications > Utilities folder there is an application called Java Preferences. 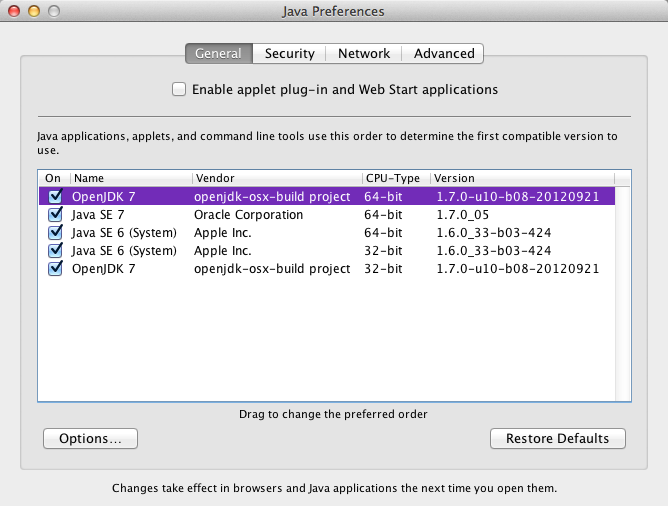 When a change is made its effects take place immediately, so if you are working in a terminal and change Java versions then you do not need to restart the terminal.

When you have your new versions of Java 7 installed, use the Java Preferences tool to the order around. If you move an environment to the top of the list it becomes the default choice.

Note that for OpenJDK 7 and Java SE 6 there may be two versions installed. Use the 64-bit version if you have that option.

As the changes take effect straight away, you can go to an open terminal and check that Java 7 is the default Java environment using the java -version command.

Over the next few months I will see what development life is like with OpenJDK 7 as the default. OpenJDK seems to be a newer version than Oracle Java SE, so will have more bug fixes and features - and possibly more bugs.

Using OpenJDK will give me an opportunity to feed back my experiences to the community and if I run into trouble, its easy enough to switch over to Oracle Java SE 7.