Bringing developers with similar experiences and interests together is a great way to organise a Hackathon. At the latest Heroku hack, it brought together developers from media companies including the Financial Times, RBI, UBM, TicketMaster, Precursive and Tquila.

As this was the first event, I am very grateful to the 20 developers that braved the awful weather that day. The evening started with a chance for developers to “talk tech” over free beer & pizza and discuss what challenges they wanted to work on that evening. In the end we split into teams based on the main language they wanted to work in and each team worked on a different application.

As most of the developers were new to Heroku, went over a check-list to get started. As its so easy to use Heroku then this only took a couple of minutes.

Thanks to the developers at Salesforce, we also had a “Heroku mentor” for each team to help them get going. Once everyone was over the initial steps with Heroku, the only challenging part was to work together to build their application in a short space of time.

Getting creative with Application Development

The different teams chose to develop applications with Java, Ruby and Node.js.

One team was quite ambitions in trying to build a location based app for seeing where the most popular tweets were coming from. Using Heroku Postgres they quickly extracted the data they needed. The location information would be shown using Google maps and unfortunately they introduced a bug they didn’t quite fix in in time that stopped those locations showing up as pins on the map.

One developer also succeeded in deploying something he had written previously, a graphical to-do list. Although it was a fairly static HTML & JavaScript site, by changing the index.html file to index.php then Heroku was happy to run it as an application.

The other teams created a voting application and an “all I want for christmas” wish list, similar to Amazon.

So every team got something deployed live to the Internet, some teams even got more than one app live!

The hackathons go on and the next one will be an all day Hack the Tower at one of the tallest buildings in London, Tower 42. Salesforce has an office with amazing views and we 50 developers signed up across different technical communities.

Update: December 2013 - HackTheTower has now moved to the Salesforce Tower in London, previously known as the Heron tower. 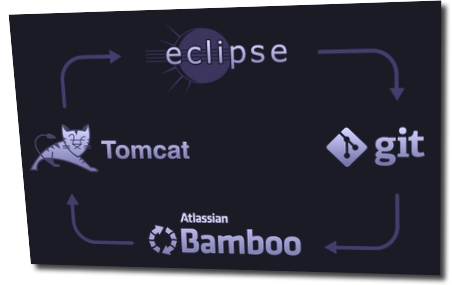 By popular demand, I’m also planning some Heroku workshops at Tower42 (where I am also running “Hack the Tower”). These workshops will give developers the experience needed to help them deploying their apps naturally and give them an effective deployment workflow with other common tools such as Github.

The workshops will also give developers insight into how they can learn other cool technology such as MongoDB & Redis without the hassle of installation and configuration.

Sign up for free to the London Salesforce Developer community to keep up with these events.I am also planning a talk for the London Java Community (3,000 members) on “Heroku for Java Developers”. This will help give developers a good overview of the platform capabilities, the developer workflow & tools as well as add-ons and cool technology they can easily try out.