As a developer you sit in front of your laptop all day (and night) so why not make it a more human experience by using the set of beautifully clear fonts from Ubuntu.  Its really quick and simple to add them to your MacOSX machine (and probably windows), so give it a try.

The Ubuntu font family has been professionally designed and is freely available from font.ubuntu.com.

The fonts are available in a range of weights as well as different natural languages.  As developers there is also a really beautiful mono-type font too called Ubuntu Mono!

Here is a simple example of some Clojure code in the Ubuntu Mono font:

And a further example of some markdown (as used by Github, etc.) 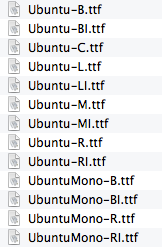 Adding Fonts to MacOSX is a simple drag and drop

Download the Ubuntu fornts zip file and extract it (open the zip file in MacOSX extracts it).

Drag and drop all the files with a .ttf extension (true type font) to the folder containing all the fonts on your Mac:

Now all your applications on the Mac should be able to use the Ubuntu fonts.

I use Emacs for most of my development on the Mac, but any app should be able to pick up the Ubuntu fonts you have added.

I have Emacs configured with the Emacs Live setup, so I simply add the Ubuntu Mono font as the default in the configuration file:

The Emacs Lisp code to set the font to Ubuntu Mono as a font size of 16 (good for demos) is:

This code looks much better in Emacs with the new Ubuntu Mono font of course.

Chaning fonts may seem like a small change to make, but anything you can do to make your development environment as enaging and enjoyable as possible is worth doing. After all I certainly spend a lot of time in my developer environment.