Learning to use Git to version your development projects can seem a little strange at first, although once you have a few basics it quickly becomes a natural and fast tool to use.

Here are some of the basics of the Git and Github workflow in word and pictures, created from my mission to teach the world (starting with London) to use Git effectively.  If you just want an overview of the basic commands, see my Git Quickstart Guide.

Git has several stages in the basic workflow:

Staging: add the changes that you want to make a part of the next commit

Local repository: the full history of your projects as a series of commits, contained within a folder called .git in the root folder of your project.

Why have a staging area?

The staging area allows you a little more room to consider what the next commit should contain.  Its much simpler to change your mind about what will go into the commit by un-staging changes.  You also do not have to be concerned about re-writing commit history.

Once you have made a commit, then you should avoid making changes to that commit.  Its usually better to fix anything in another commit than to change the first one.

Once you share a commit with others, eg. via Github or CI server, then you should consult with everyone concerned before making a change to a commit.

A Git and Github workflow

You can version changes for your project to your local repository as often as you need without conflict as you are the only collaborator.  This also means you can work off-line too.

The most well known example of shared repositories is Github. 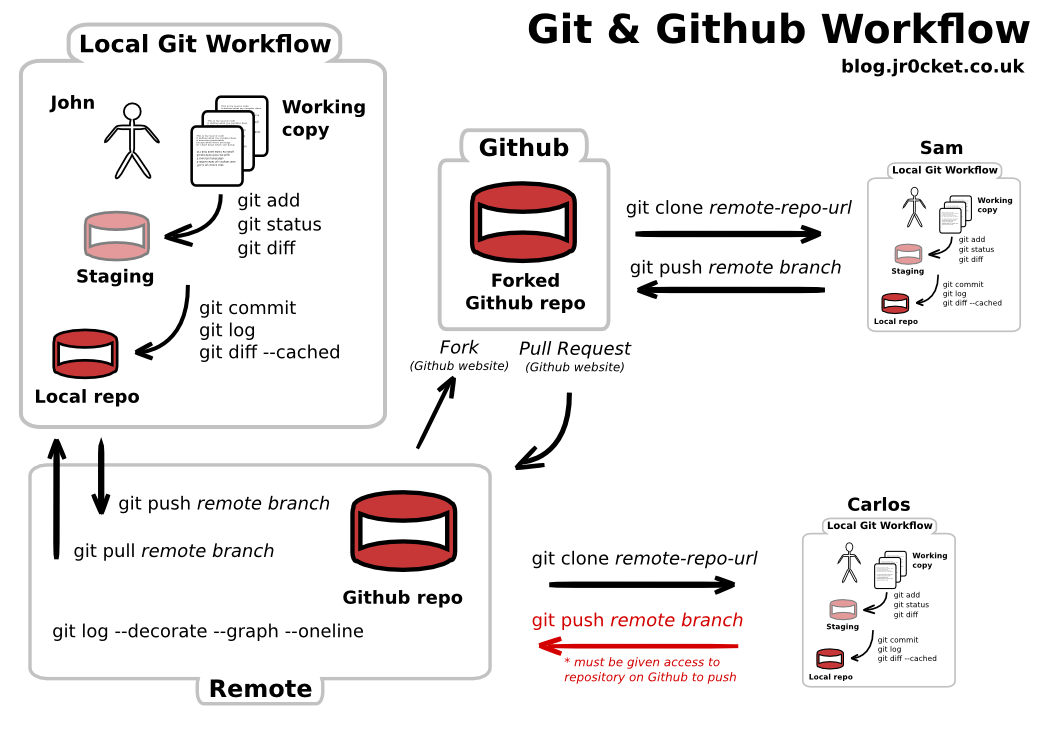 In the example, John has started work on a project on his laptop and created a local repository using the command git init.

John then stages changes using git add filename or git add . if he wants to add everything. When John is happy with the changes he has staged and has though of a good commit message, then he creates a new commit with the command git commit -m "meaningful commit message".

John can then push his changes contained within the local repository to the Github repository using the command git push remote branch - where remote is the alias for the github repository URL and branch is master as no other branches have been created at this point.

By cloning the Github repository made by John, Carlos has a new local repository and can see the full history of commits.  Carlos can edit the working copy as well as stage and commit his own changes to this new repository.  Carlos cannot push changes back to the repository on Github though, so if he did git push it would fail.  To update the github repository, John would need to add Carlos as a contributor first.

Sam gets a copy of her forked repo on her laptop by using the command git clone remote-repo-url.

If Sam wants to share her new commits with John, then from the web page of her forked Github repository she can create a pull request.  This sends a message to John to let him know that there are changes in the forked repository that he may want to pull into his Github repository.

Should John accept the pull request made by Sam, then he will also need to update his local repository using the command git pull remote branch

Using Git and Github may feel a little strange at first, but once you have some practice and if you keep your workflow simple then using Git will become very natural and fast.