The hack used the Play framework, a recent development that makes developer lives easy when building web applications. A project had been started a couple of weeks ago using Play Framework 2.0.3 although as there was a new update, we moved to 2.0.4 during the hackathon.

Heroku has been used as the deployment platform as it makes everything really easy. You can deploy with a commit to a git repository. So long as your build file works locally, then you can deploy on Heroku.

As we were using Heroku, we made use of several addons availalbe, specifically adding MongoDB to the design. MongoDB would be used to pull in information from sites that had a limited hit rate. Mongo could also be used for holding any adhoc data we wanted to keep around.

Andy Hicks, our beloved community leader created a play framework project. Then set up an heroku account, adding a couple of extra people as collaborators to be responsible for pushing changes to live.

Although we could just deploy directly onto heroku, its useful to Github as your development repository.

Using Github, you can manage the code base by forking the main repo and submitting change via github pull requests. This encourages developers to commit often and make smaller changes, essential things if you only have a few hours to get things live. 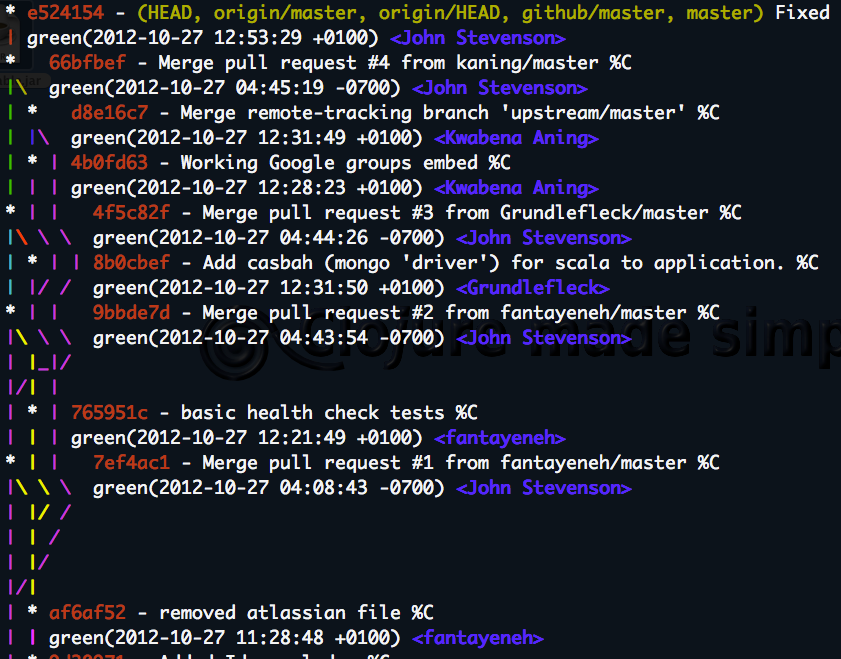 Even though we were first commiting changes to github, we still pushed the changes to Heroku regularly. I would push changes up to Heroku after each pull request had been successfully merged.

If there were multiple pull requests waiting (usually due to fixing a conflicting pull request) then I’d merge all the outstanding requests before pushing to heroku.

The deployment process was essentially myself pulling changes from the github repository to my laptop, then pushing everything to the heroku git repository.

Keeping up to date

One trick we learnt to make things easier is the git stash command. If you have been working away on your code and realised you were behind master, you can hide away the changes in your working copy and git pull from the master without loosing your changes.

When you run the command git stash pop then your working copy changes are re-applied and you can resolve any confilcts you have before commiting.

Alternatively, if you are doing more experimentation then a branch was created to work on which would then be merged and committed into master if it was valuable code.

Git experience:
Although git is very popular now, many developers are still learning how to use it effectively, especially when working collaboratively.

.gitignore:
We had quite a few conflicting pull requests due to the .gitignore file. So to keep things simple we agreed to keep changes to .gitignore seperate from code commits. Likewise with any other non-essential config changes. Add .gitignore to .gitignore and just maintain a managed set of ignore files

Keep commits small::
Its was so much easier to merge a series of small changes when you are using pull requests, especially when you have someone managing the queue and can merge those changes quickly. The bigger the commit, the longer it takes to merge and backs up your pull requests. Our largest commit affected 73 files and it took several attempts before we could get it to automatically merge. At least it gave us chance to talk about the change in more detail.

It was a great hackathon and thanks to everyone that came along, Robert Rees for orgaising and The Guardian for hosting us. Why not get yourself to a hackathon and join in the fun, or even organise your own ?