During the London Scala community hackday at the Guardian, we first put together the LSug community webapp. For this we used Play2 framework, MongoDB, Github for pull requests and deployed onto Heroku.

Towards the end of the hackathon, someone suggested we also wired the project up to Travis-CI, although none of us knew much about using it. As the hackday was all about discovering how to use new stuff, I decided to add Travis-CI and worry about setting it up when we got to it.

Travis-CI** is a continuous integration service that allows you to run build jobs and tests automatically, straight from Github. Its ideal for open source projects.

Whilst Travis-CI has been pointed to the the lsug-dojo/lsug-website repo on github via my account, no one got round to adding a Travis-CI configuration file. The down side of this is that those contributors to the lsug-dojo/lsug-website repository received an emailed error message each time something was pushed to the repository or a pull request was accepted.

Not having a working Travis-CI was also noticeable when reviewing pull requests, as Travis-CI talks to Github and lets it know that your projects have failed. It then up to you wether you still want to merge. 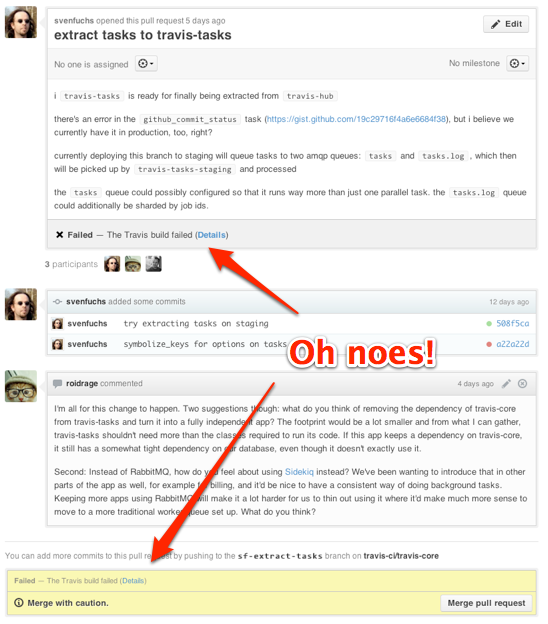 With a quick Google I found an example travis-ci configuration file for Play 2 framework. I just dropped in a new .travis.yml file into the lsug-website github repository and that triggered another travis-ci build. This time the test ran and passed!! One benefit of using Travis-CI is to encourage the use of tests, it also gives information about the state of the github repository. This is especially useful when working with pull requests.

This is the first time I have used Travis-CI and it was really easy to configure. If you have any comments or ideas about this, please share them with the group or myself directly.

Clojure and Scala are two very exciting functional programming languages on the Java virtual machine (JVM) which provide many of the features than Java7 and Java8 have been working toward. There has already been a lot of activity around these functional languages in the UK, from financial services clients, media companies and developers who want to keep ahead of the game, all are getting involved with these languages now. Some of the top jobs are even mentioning these technologies by name.

With a long history of support for open source projects, it is no surprise that Atlassian support the development of Clojure and Scala by providing Confluence and JIRA to the project teams and wider community.

On the third Thursday of the month the London Scala user group runs a Scala coding dojo at Thoughtworks office. The event has a great atmosphere and is a really fun and friendly place to learn and practice the Scala programming language (and some TDD / BDD).

For the Scala coding dojo I use the Simple Build Tool (SBT) to create a new scala project as well as run the building and testing of that project during the dojo.

When running Scala on Ubuntu Linux, scala myscript.scala, if the network configuration in your /etc/hosts file does not have a loop back address you can experience the following error:

Edit your /etc/hosts file, gksudo gedit /etc/hosts and ensure there are the following lines at the top of the file:

Where mycompter is the name you gave your Ubuntu computer when you installed it.

It would seem that the scala compilation daemon does not pick up the network address when running scripts. The same problem occurs when there is no network, but I have not found a workaround as yet (except to find a wireless hotspot).

This is an outline of how I have set up the git repository on the London Scala user group dojo workspace, hosted on assembla.com.

See the lsug-dojo workspace for details of checking out dojo code.

The London Scala user group are holding monthly dojo events to help everyone get to grips with this exciting new language implementation for the Java Virtual Machine (JVM). A coding dojo is a practial event where everyone decides on a challenge or technology to try out, then getting into groups to code up an application. The coding dojo concludes with each team doing a show-n-tell of what app they have created and any lessons learnt.

Here are some details of how we set up the tools to help with the London Scala user group coding dojo.

The London Scala user group are running a Scala install fest to get people going with the language and have a working environment to join in with the monthly coding dojo events. The wider goals of the install fest is to also decide how best to setup an environment for Scala.

The Netbeans IDE is a pretty lightweight but easily extensible IDE for different languages that run on the Java Virtual Machine (JVM):

This article covers setting up Scala in Netbeans 6.8 in Linux (works on MacOSX too) - includes installing Scala 2.8, check out the Netbeans guide for Mac and Windows installs and other tips.