Continuing my modeline customisation with powerline, I wanted to add colour to match the Cyberpunk theme of Emacs Live. To do this I copied the default them and custmised it, adding colours and chaning the style of seperatr. Here is how I customised the powerline code to make my own theme.

See how I previously tweaked Emacs modeline with powerline, as this article carries on from that. My modeline also includes an earlier tweak for the minor modes.

Although the arrows are nice way to seperate the different parts of the modeline, I tried out the different styles. My favorite was the wave style.

To change the style, I edited the lib/powerline.el file and change the powerline-default-separator to the value to wave. The choice list shows you all the styles of seperator available.

I restarted Emacs each time I changed the seperator style for it to take effect. I am not sure how to update the style without a restart.

Creating my own theme for Emacs Powerline

I wanted to change the colours of the modeline to make it more personal to me and also help it stand out between all the text of the buffers.

Rather than mess up the default theme I simply edited the lib/powerline/powerline-theme.el file and copied the default theme completely, called the new theme powerline-default-theme. This allowed me to experiment whilst still having a working reference theme to fall back on.

To use my new theme, I edited the configuration file ~/.live-packs/jr0cket-pack/config/powerline.el and changed the line defining the theme

There are some of the elements I was not interested in, such as the size of buffer and mule-info. So I edited my jr0cket theme and removed the lines

The default theme adds padding between some elements by adding a space character.

There was aso padding around some elements on the modeline, specifically the line l & column c numbers and the percentage of buffer above the currently visible text p. The default theme adds numbers in front of these caracters adds padding, which I didnt feel was needed so I deleted those numbers.

Changing Colours in the modeline**

The powerline default theme is very grey, so I wanted to add some colours that would work with the Emacs Live Cyberpunk theme. Changing colours is done in the lib/powerline/powerline.el file.

I changed the text colour using :foreground, the background colour with :backgroundand made the text bold using :weight bold.

Adding an extra face for the buffer name

I wanted to change the style of the buffer name, so rather than change the Emacs theme I added a third face to the lib/powerline/powerline-theme.el.

I then tried out different colours for the buffer name and settled on the reverse of face0, so updated the lib/powerline/powerline.el file by adding an active0 and inactive0 configuration as follows:

Here is the overal view of Emacs with the jr0cket theme and colours applied. 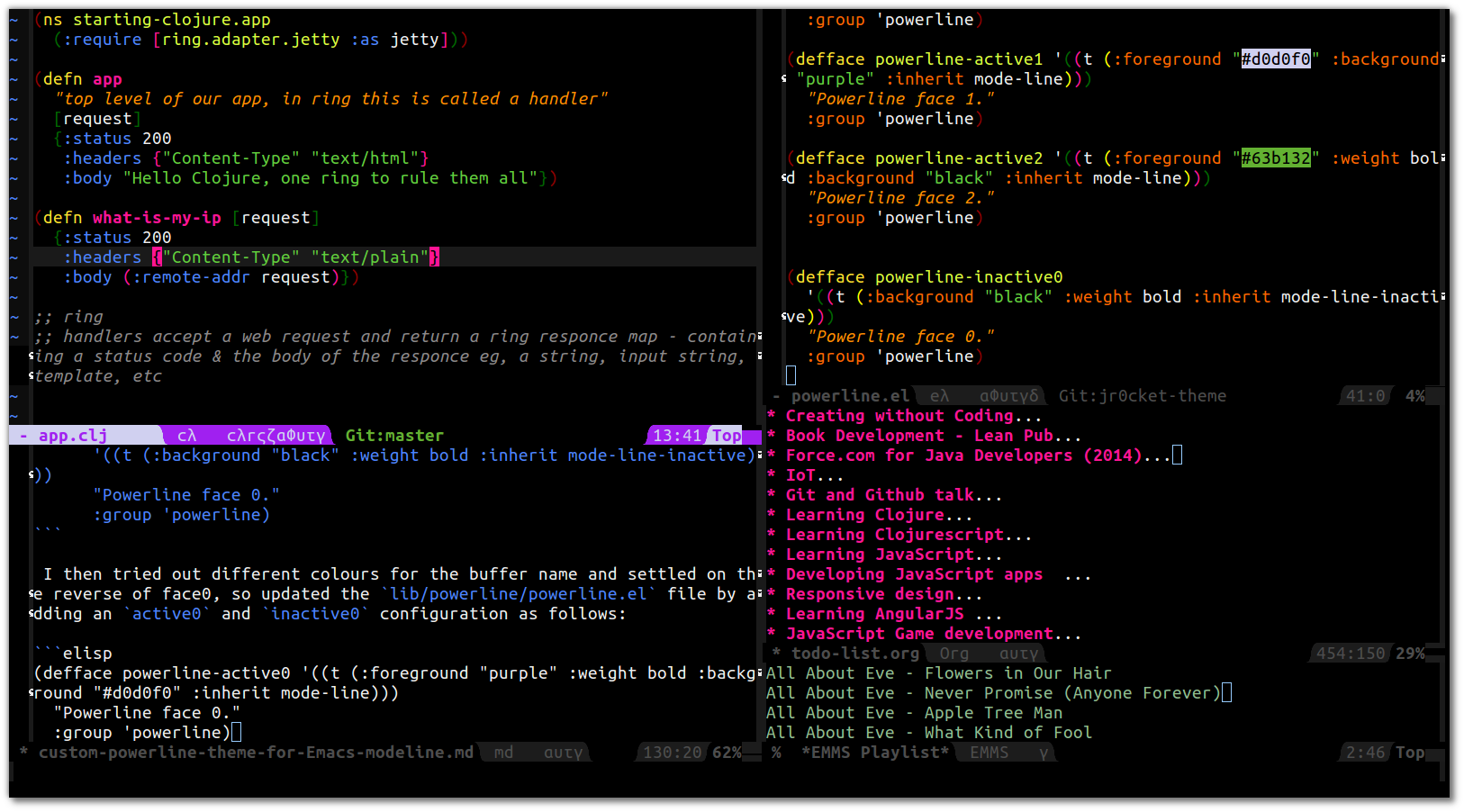 Here is the complete code for the powerline-jr0cket-theme

Powerline is a really nice way to add that extra touch to the Emacs experience. Its also pretty easy to configure to give you your own personalised look to the Emacs modeline. Let me know if you have any interesting customisations to your Emacs setup.