If you dont have Emacs Live, you can install it from the Emacs Live Github repository and either clone the repository into ~/.emacs.d (moving or deleting any existing directory) or preferably use the install script that also sets up a ~/.live-packs extension directory.

You can find the available versions of the cider-nrepl plugin on Clojars.org. The plugin version should be the same version of CIDER you are using in your Emacs configuration, which at the time of writing was 0.8.1.

Either create a new Clojure project using lein new my-project-name or open an existing project in Emacs (either the project.clj file or a .clj file from src/my-project-name/).

With your cursor in the Clojure file buffer, run CIDER using the keybinding C-c M-j or the emacs command

Alternatively, you could run a REPL using lein repl on the command line and connect to that REPL using C-c M-c or M-x cider. You will be prompted for the connection details of the running repl, ie. host, port.

There are a number of Cider keyboard shortcuts (keybindings) already defined, here are some of the most common ones I use: 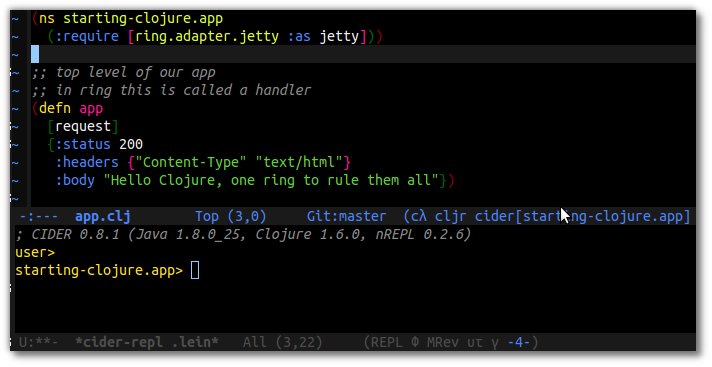 Changing into a namespace does not automatically evaluate the code in that namespace, so evaluate the whole buffer C-c C-k or evaluate specific expressions (forms) C-c M-e. Once evaluated, you can evaluate that code in the REPL.

Some further reading around CIDER: