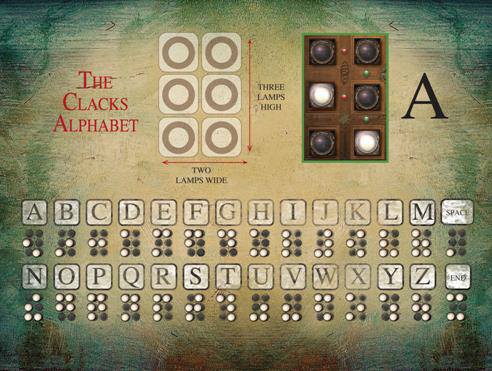 We wanted to be able to take any English language messages and transmit it across the clacks network, then

The initial data structure chosen was essentially just modelling each individual clack. Since a clack is a 2x3 structure, the simplest way to represent a clacks is to have a vector that contains 2 vectors, each with three elements.

So a simple expression of the letter a in the clacks alphabet would be:

Therefore we could define a single letter of our alphabet as follows:

Before we define the complete alphabet using this data structure, lets test if we have the right data structure for our conversion process.

Testing a simple conversion with our data structure

Lets try the simplest way to convert a character into a clack:

Calling the function converts a string into the corresponding clack

Although the code is simple for 1 character, it does hightlight the problem of converting the whole alphabet. We would need either a deeply nested set of if statements or a very long case statement, neither of which seems to be a particularly functional approach or idiomatic Clojure.

Even if we did use a case statement, how would we convert a clack back into a character?

So perhaps we need to change the data structure, one that provides an easy way to map to values together.

Also, there seems no value in mapping values to a 2x3 grid as long as we consistently express a clack.

Defining the alphabet with a map

Its very common to use Clojure keywords for the keys, to make it easy to look up a particular value by refering to the keyword.

To help with testing this new data structure desing, we crated enough letters of the clacks alphabet to make some simple words, i.e bat

The -> character is part of the function name. This is a Clojure naming convention used when the function you are defining converts from one type to another.

And call the function as follows

So we redefined the string->clacks function to take in a whole word.

Now we could convert any workd that used the letters of our limted alphabet. We chose bat as a simple word.

As we are passing a string and not a keyword to the clacksify function, then we first convert the string to a keyword using the keyword function.

Converting the clack to a string

Is there a simple way to look up a key given a value that is unique in the map?

All Clack codes are unique in the map, but there did not seem to be a simple expression to find the key when given a value.

We could have created a second mapping, however having two maps seemed redundant and a potential cause for silly bugs.

The answer was simple once we found it. As the clack codes are unique, they could be used as keys for the letter values, we just needed to swap the map around. Swapping a map’s keys and values was done by writing a reverse-map function.

So calling these functions with a clacks

Its probably at this point we should have realised that we didnt need to use keywords to represent the characters of the alphabet. In fact, using keywords made a little more work for us.

Our clacks->string function returns the right result, but not quite in the format we want. Rather than a single string, we get the individual characters.

Using the reduce function we can apply the str function over the resulting characters to give a single string. So our function becomes

Working with another language

Thanks to a flexible design with no side effects or side causes then its really easy to replace the English language alphabet with another language that can be encoded into Clack codes. So languages based on the greek, latin or cyrilic alphabet could be send if a suitable alphabet with clack codes is supplied.

We were quite happy with the code produced in this dojo. The code is pretty readable we believe and we have taken a fairly simple approach to the design. In hindsight we could have made the code even easier if we had tested out the map data structure a little more and used a string character for each letter in the alphabet.

Working in an editor attached to a REPL worke well (Vim in this case, but not relevant to the development of the code). The behaviour of the code was tested with almost every expression, so we gained a good understanding of each line of code.

There are ideas to take this further and show a visual representation of a message passing through a chain of clack tower, showing how the message would pass through the system at a human speed. This woud assume a fixed time to show a clacks between each clack tower and a minimum level of speed by the human part of the clacks tower.

No REPL’s were harmed in the making of this code, although one REPL was heavily used.